In the Footsteps of the Dutch Sailors - Part 3

(Written in Dutch by Lo Liebregts; translated and annotated by Hans van Wuijckhuise)

Monday morning April 16 2012. Today will be the second walking day of our Big Walk. It not difficult to raise early; we do not set an alarm clock anymore. At seven we all four are having breakfast. It is quite busy in the breakfast room of the hotel. In a Toyoko Inn hotel the breakfast room is the main lobby; behind a shutter or folding panels a small kitchen is hidden; the breakfast is Japanese style with a touch of western influence. 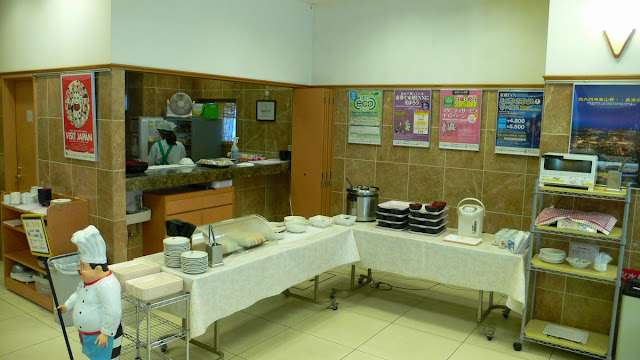 At eight o’clock we leave for the railway station and buy a ticket from Oita to Kouzaki, a distance of about 20 kilometres. The ticket price is 270 Yen, about € 2,55; for that price it is in the Netherlands hardy possible to buy a train ticket for more than a few kilometres.

A bit later we are sitting in the train and already meet a walker who will join us today. After half an hour we arrive in Kouzaki and in the waiting room are more fellow walkers for today; all in total sixteen of them. Also our driver Makoto Nagase, who also happens to be the chairman of the walking association of Oita Prefecture (province or county). Probably the same every day of our walk an opening ceremony is held. Nagase-san welcomes the walkers and explains the procedures concerning traffic and so on. After that Masaji-san makes his speech and while he is searching for his papers, we Dutchman have to greet the fellow walkers with a short speech.
Before anything else can happen, stretching is a must in the Far East; always one of the walkers is or is promoted to have the lead and we are stretching all kinds of body parts in front of a station. When we are ready for starting all walkers parade along us and shake hands; something that is considered typical Western and that is why it is fun. We just smile about it.

Although it is rather cool, it does not last long before droplets of sweat start sparkle in the sun light but in the shadow it is cold. Today rain is expected but for the time being, it is fine. One of the local walkers is the guide and I have to accompany him in front of the group. Shortly after the start we walk along narrow roads and in between fields. 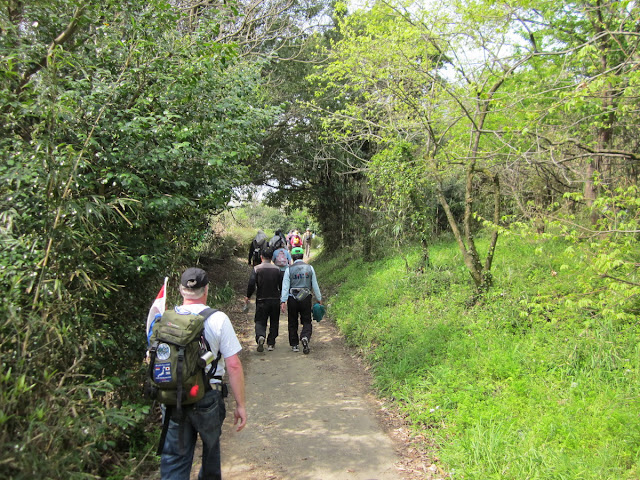 Than the road becomes a path and that path becomes narrower and steeper. A bit later we walk on a normal road again; the local guide knows the way quite well. As we pass a convenience store, we are advised to buy lunch. Three quarters of an hour later we stop in a small park for lunch break. We still carry the big oranges we got yesterday, they are peeled and distributed among all. At a quarter to twelve we start up again and continue alternately  through living areas and fields. 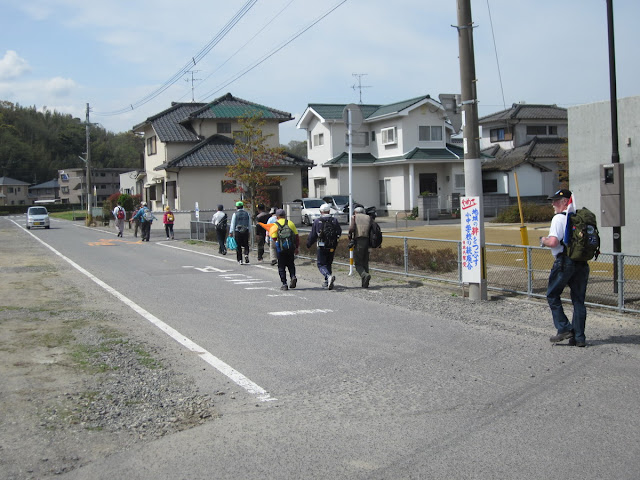 We walk through several living areas

But after a while, we more often walk in build-up areas. Several times we cross the railway and Lo counts the number of bridges we cross. In the train he has done the same and he has noticed the last river is easy recognisable because it is the widest. In the last kilometres we walk through a covered shopping centre. It is past three o’clock when we finally arrive on the square in front of the station, our destination for today. Of course new group photo’s must be made and then we say Goodbye to the other walkers. Some of them we will meet again tomorrow. 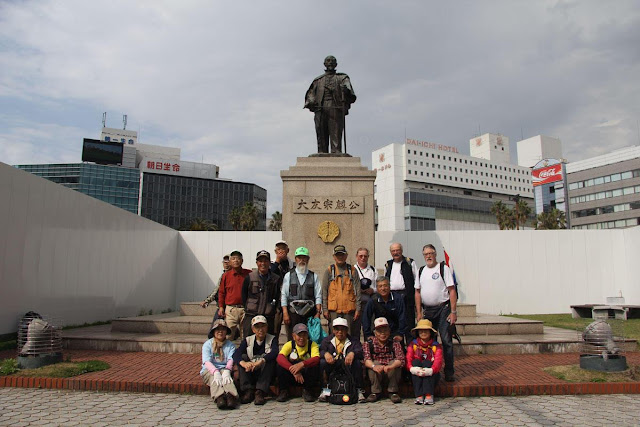 After diner we make a short walk trough the city centre, especially the covered shopping mall. Most shops are already closed by means of shutters, only the drinking and dining facilities are still open.
We return to our hotel and rooms. Tomorrow there will be a another day.
Posted by bigwalk2012 at 16:55

bigwalk2012
Big Walk Kyushu 2012 is the histrical walk from Kuroshima to Deshima via Hirado, in the footsteps of the Dutch sailors.