In the Footsteps of the Dutch Sailors - Part 2

(Written in Dutch by Lo Liebregts; translated and annotated by Hans van Wuijckhuise)


It is Saturday April 14 2012. At six in the morning the alarm clocks are sounding in the single rooms in the New Tamaya Hotel in Usuki. Time to rise, at a quarter to seven we are expected at the breakfast table. We all have slept well and for the first time this journey we have a classic Japanese breakfast. Luckily we are asked how we want our egg, fried or raw, the Japanese like it that way. Other items of the breakfast are: a bowl of rice, a piece of smoked fish, some leaves of ‘nori’ (seaweed), green tea and a glass of water. As finish we have the choice of coffee or green tea. We feel comfortable, it is just like three years ago.

Now we have to dress for the opening ceremony. A taxi bus is waiting outside and will bring us to the little harbour of Sashiu. Some man in black suits are waiting, we join them until the group has grown to about fifteen people. Also an ‘old’ acquaintance from Hirado, a town on the West coast we will visit in a few weeks, is present. We board a small ferry and navigate to the little island of Kuroshima.
A little later the small ferry makes the short trip a second time so altogether thirty people are present. Among them is also team of NHK Kyushu television. Someone from the local Walking Organisation is the master speaker and several speeches are made, one of them is by the deputy ambassador of Dutch Embassy in Japan Mrs. Trooster. We, the four walkers are introduced and tulips are laid at the monument commemorating the arrival of ‘De Liefde’. Them the exchange of politenesses and the finally obligatory photo session.

With the little boat we ferry back to mainland Kyushu and get in a car of the walking association which brings us to small courtyard where we have to wait for someone who has just attended the ceremony. He arrives with a wheelbarrow full of big oranges and offers them to us; he also tells he is going to walk with us tomorrow. His age is 77 years.
Then we go by car to the base of the castle. Two ladies, one of which wears a kimono, and two young children are waiting for us to start a sightseeing tour through the remains of the castle of Usuki and next the historical streets of the town. 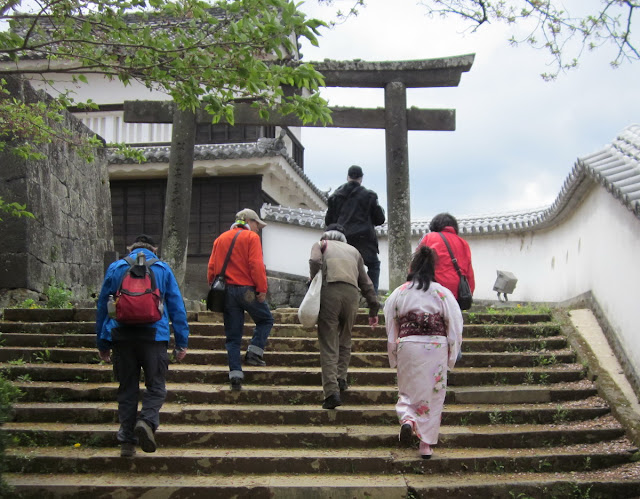 One of the Japanese guides in kimono

Remarkable is a stone torii with a lot of little stones on top of it. Because everything in Japan has a meaning, we ask. The stones are thrown up from underneath the torii and if a one lands and rests on top, it forecasts a lot of luck. It is no game, they try to convince us, but a kind of prayer. 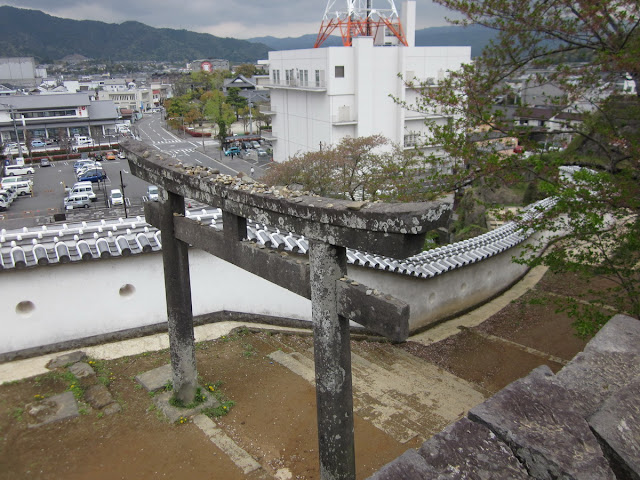 Stones on the torii

After this interesting excursion trough old Usuki and its castle, we are taken to a restaurant for lunch. Also this lunch is Japanese style; we expect we will not have Western food quite often. We enjoy the lunch and after it, we are driven to our hotel. He wants to know if the Wheely will fit in his car together with us three as passengers. It is a matter of trying and it fits. We say Goodbye until the next morning eight o’clock when he is supposed to bring us to the starting point of the day. The remainder of the day is spend on administration and packing our equipment.
Six o’clock is the time scheduled for our diner which we will have in the hotel. It is a combination of fish and chicken tempura. Tempura is a way of preparing food introduced in Japan by the Portuguese. Pieces of meat and chicken, shrimps and vegetables are dipped in a thin batter and then deep fried shortly. After diner, we preview the next day and then everyone goes to his room for making reports.

Sunday April 15. At six o’clock the alarm clock sounds. Today is the day our historical walk really is going to start. Nothing special on its own, after all it is just a normal walking day of twenty one kilometres. But it is also a ‘moving day’; all our luggage has to be transported to the next stay.
At seven in the morning we have breakfast, Japanese style again. Then we go upstairs to bring down the luggage. The driver wants to have the Wheely loaded first before the other pieces of luggage; everything fits in neatly. Exact on time we leave … for the police station. Masaji-san, our Japanese walking friend has lost (forgotten) his carrying bag somewhere during our excursion; now he makes a notification of it.
We go back to the landing stage from which we departed for Kuroshima. Today this stage will be the starting point of the Big Walk and when we arrive, a number of people are already waiting. Six of them are Japanese walkers who will join us today; others are reporters of papers. Also a group ‘kolf’ players are present playing their game on the local course. Kolf is a forerunner of golf, once introduced in Japan by the Dutch and nowadays in Japan a game mostly played by elderly people; they all show interest in our opening ceremony. Also the interpreter of the last days is present with her family, the young children stick to Lo and wants to walk with him. They are much to young to walk the whole day but are upset if they are only allowed to accompany us till the village border.
The orange grower is present but also walks only till the village border; it is an old Japanese tradition to accompany friends to that border if the leave on a journey. 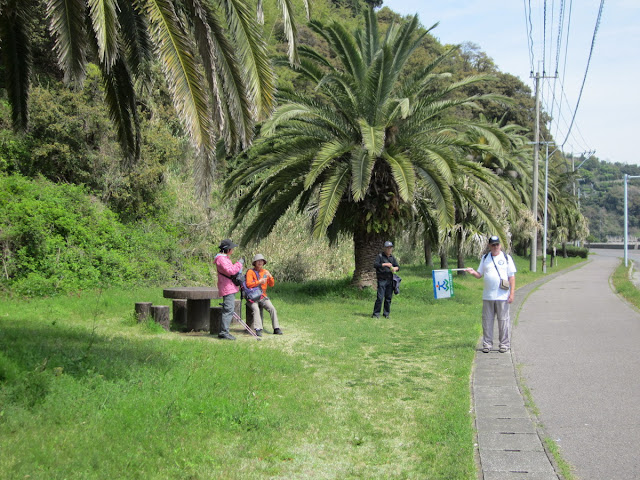 Waiting along the coastal road

We continue our walk mainly along the coastal road. Large stretches are provided with a combined cycle and walking lane which we are using greedily. Against lunch time we arrive in another harbour town where we are lead into a supermarket to buy lunch which will be enjoyed on the sea shore in open air. We have covered more than half the distance we have to go today. 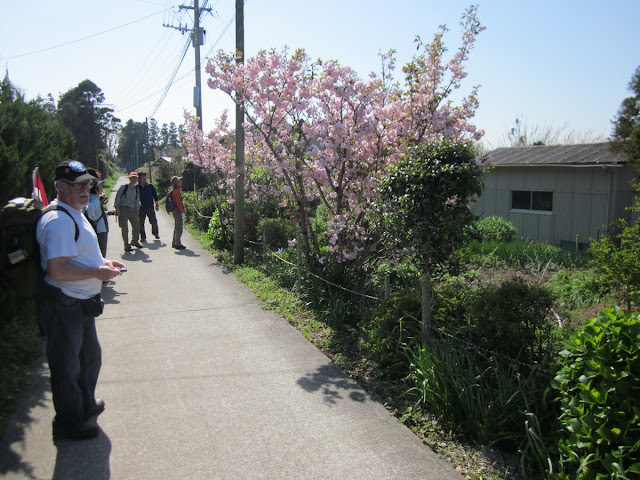 After lunch break we continue our walk on a former railway track now converted to a cycle and walking path. It is almost perfect walking because we are not disturbed by motorised traffic. Slowly we move further away from the sea and when we finish this stretch of the railway track, we are in build-up area and notice a direction sign to Kozaki Station, our goal for today. It looks like it is a straight road to the station. Lo has taken the lead and I overtake him and ask if he is in a hurry. I know if someone is walking in front, he is likely to go in his own pace. This might be to fast for the followers and he slows down. In a short time we reach the station square and after arrival, we thank or say ‘so long’ to our accompanying walkers. Our driver is already waiting but first a group picture must be made. The fellow walking take the train and our driver brings us to the Toyoko Inn near the railway station in the city centre of Oita and our stay for the next three nights.

bigwalk2012
Big Walk Kyushu 2012 is the histrical walk from Kuroshima to Deshima via Hirado, in the footsteps of the Dutch sailors.